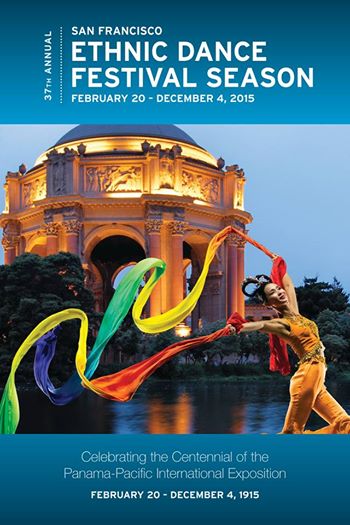 November 6, 2014 – San Francisco, CA: The San Francisco Ethnic Dance Festival will celebrate the centennial of the Panama-Pacific International Exposition in 2015 with a series of world dance and music performances and events from February to December. The annual, month-long Festival in June will serve as the celebration’s centerpiece, and will be set in the only grand structure remaining from the historic 1915 world’s fair, the Palace of Fine Arts Theatre. Details and artists of the 2015 Festival may be found below. For more information and tickets (on sale February 18), visit www.sfethnicdancefestival.org.

The 2015 Season will launch under the rotunda of San Francisco City Hall at noon on February 20 with dance and music from a myriad of world cultures. Festival performances in June at the Palace of Fine Arts Theatre will run June 6-27, and feature dance and musical traditions from China, Europe, Hawai’i, India, Indonesia, Korea, Mexico, the Middle East, Peru, Spain, the Philippines, South Africa, West Africa, and the continental US. Each weekend’s program includes nine or ten dance performances in a two-hour show, with numerous cross-cultural,  collaborative, and transitional pieces.

One of the most memorable attractions reported from the Exposition was at the Hawaiian Pavilion, where a show featuring hula dancers included the first continental US ’ukulele performance. These Hawaiian shows had the highest attendance at the entire fair and launched a Hawaiian cultural craze that influenced everything from American music, to movies, to fashion. As more people heard Hawaiian music, there were hundreds of Hawaiian-inspired songs written in all the popular styles of the day, including ragtime, blues, jazz, foxtrot and waltz tempos. One immediate result was the enormous impact on US musical recordings, with more Hawaiian music records sold in the US in 1916 than any other type of music.

The 2015 Festival Season will also include the screening of a new documentary film about the Festival. Board President Māhealani Uchiyama says, “This Festival is iconic to the Bay Area’s cultural landscape and serves as the hub of the greatest world dance community in the nation. This film will bring the importance, history, and excitement about the San Francisco Ethnic Dance Festival to dance and music enthusiasts well beyond San Francisco, and affirm our role as national leaders as one of the first and most extensive festivals of world music and dance.”

Annual Festival Auditions Move to November
In addition, 2015 brings a change to the Festival auditions, which will be held each year in November, instead of January. The next Festival auditions will be held at the Palace of Fine Arts Theatre on November 7, 8, 14, and 15, 2015. The auditions are open for the public to watch. Since its inauguration in 1978, the San Francisco Ethnic Dance Festival has maintained its preeminent scope and reputation as one of the most comprehensive, widely respected, diverse,
and engaging events of its kind in the world.

February 20 – December 4: Monthly Rotunda Dance Series performances marking the 100th anniversary of the Panama-Pacific International Exposition. The free Rotunda Dance Series has offered monthly performances since 2010 and are co-presented with Dancers’ Group, in partnership with San Francisco Grants for the Arts, and San Francisco City Hall. The series will include performances by Gamelan Sekar Jaya, Hālau o Keikiali’i, Margaret Jenkins Dance Company, Shinichi Iova-Koga, and many other Bay Area artists sustaining dance and music from around the world. The season will close on December 4, closing day for the 1915 PanamaPacific International Exposition, with a tribute to the Kuna people of Panama, who were perhaps the most impacted by the opening of the Panama Canal in 1915.

June 6-7, June 13-14, and June 26-27: The Festival performances in June return to the Palace of Fine Arts Theatre for three weekends. The first two weekends will be classic Festival performances, featuring a different group of performers on the stage each weekend. As always, audiences will experience an inspiring lineup of Bay Area artists and musicians collectively sustaining important cultural heritage from around the world, including China, Europe, Hawai’i, India, Indonesia, Korea, Mexico, the Middle East, Peru, Spain, the Philippines, South Africa, West Africa, and the continental US. Each weekend’s program includes nine or ten dance performances in a two-hour show, with numerous cross-cultural, collaborative, and transitional pieces. The final weekend at the Palace of Fine Arts, June 26 – 27, will feature a screening of the Festival’s documentary film along with special dance and music performances to be announced.

The weekend of June 20-21: The national Mayors’ Conference will take over the Palace of Fine Arts Theatre and the Festival will head back to Yerba Buena Gardens to support the Yerba Buena Gardens Festival’s all-day Hawaiian cultural fête, presented in partnership with Nā Lei Hulu I Ka Wēkiu. The Festival will present a panel and workshop in the Yerba Buena Center for the Arts Theater addressing the history of dance in the Bay Area since 1915 along with global ramifications.

November 7-8 and November 14-15: Festival Auditions, where more than 100 dance companies will perform, hoping for a coveted slot in the 2016 San Francisco Ethnic Dance Festival.

*Artists who are new to the Festival

Tickets to the June San Francisco Ethnic Dance Festival performances are $25 – $48 and go ON SALE FEBRUARY 18 online at www.sfethnicdancefestival.org, or by calling (415) 392-4400. Family matinees on Saturday afternoons offer 50% discounts to children age 12 and under, and group discounts are also available. The full Festival performance schedule will be available in January at sfethnicdancefestival.org. High resolution photos and broadcast quality video are available by request by contacting Scott Horton at (510) 735-9200, or scott@worldartswest.org. Images can be downloaded at http://www.sfethnicdancefestival.org/about/press/photos.html in January 2015.