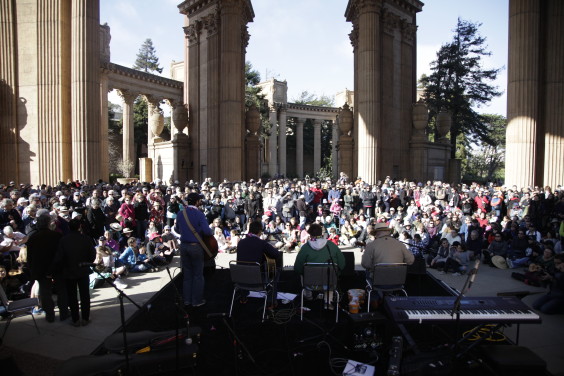 Thousands of people — families, history buffs and admirers of the Panama Pacific International Exposition (PPIE) – celebrated the 100th anniversary of the 1915 World’s Fair at the iconic Palace of Fine Arts during a weekend filled with events honoring a seminal event in San Francisco’s rich history.

Marking what was considered “the rebirth of the city” the World’s Fair attracted nearly twenty million visitors to San Francisco in 1915 to experience the 635-acre Jewel City and all its amazing innovations, events and activities.  San Francisco Mayor Ed Lee kicked off the yearlong Centennial celebration today by officially re-opening the doors of the Palace of Fine Arts to the public as Innovation Hangar, a unique social innovation space that facilitates connections, ideas and investments in a way that simply cannot happen in the virtual world.

“San Francisco’s innovation, imagination and vision were on full display at the World’s Fair in 1915, and these qualities are what have always been at the heart of our City,” said Mayor Ed Lee.  “Today we begin a yearlong celebration of the Panama-Pacific International Exposition Centennial here at the Palace of Fine Arts and venues across our City, re-opening this majestic building to the public to experience, to discover and to understand how the spirit of innovation has shaped the City’s past, present and future.”

The weekend events began Friday evening with Palace After Dark, where visitors to the Palace were able to experience what it was like to be at the World’s Fair and enjoy a film and light installation inside the Palace Theatre lobby.  Outside, the Palace Rotunda was illuminated in colored lights as it appeared on Opening Day in 1915. Mayor Lee, along with other civic and cultural leaders strolled the Palace grounds, where costumed-characters re-enacted fairgoers as they would have been dressed 100 years ago.

The main feature of the weekend was PPIE100 Community Day, a free event for the public that began Saturday afternoon at the Palace, boasting a celebration of music, arts, history and innovation ‑ all of the things that made the 1915 World’s Fair such a special moment for San Francisco and the World a century ago.

“We are thrilled to be re-opening the beautiful Palace of Fine Arts to the public and bringing together so many of San Francisco’s cultural, civic and business organizations to celebrate the 1915 World’s Fair,” said Phil Ginsburg, General Manager, San Francisco Recreation and Parks Department, which manages the Palace of Fine Arts.  “This is has been an exciting, historic weekend and we look forward to hosting many more fun, entertaining and educational events to the public throughout the year as part of the Centennial.”

Inside the Palace a broad array Bay Area cultural institutions, including the Fine Arts Museums San Francisco, Music In Schools Today, The Exploratorium, and Heyday Books, along with companies with connections to the original Fair (AT&T, Wells Fargo, Hearst Corporation and Ford Motor Company), featured exhibits and displays, along with more than thirty other community organizations. Visitors were able to see rare collections of PPIE artifacts, original 1915 Ford Model T’s, sit in a Wells Fargo stagecoach and take special period photos with historic treasures.  Guardians of the City displayed two of the ten original fire engines from the 1915 Exposition.

Innovation Hangar, which will be open throughout the year to the public, featured new inventions and prototypes, hands-on educational activities and amazing exhibitions from Bay Area Discovery Museum, Kaboom, Smithsonian’s Lemelson Center, Maker Media and Wearable World, among others.

“iHangar is designed to be an epicenter of learning and exploration – a space bursting with inquisitive looks, rolled-up sleeves and ah-hah moments,” said Dan Shine, curator for Innovation Hangar.  “We are thrilled to be a part of this iconic treasure and continue its legacy and innovative spirit that defines the San Francisco area.”

Also inside is a 10,000 sq. ft. exhibition by the California Historical Society, “City Rising: San Francisco and the 1915 World’s Fair” that shares the rich and remarkable history of the PPIE.  The California Historical Society opens another City Rising exhibit on Sunday (11-5 pm) — a stunning jewel-box show, highlighting the Fair’s history, beauty, complexity, and impact — at its 678 Mission Street location.

“We are thrilled to work together with so many partners and collaborators to help bring back the spirit of the PPIE and the 1915 World’s Fair to San Francisco,” said Dr. Anthea Hartig, Executive Director of the California Historical Society.  “The yearlong events being planned provides a window to tell the amazing history of innovation and perseverance of this City and the brilliant future that lies ahead.”

A much-anticipated Uke-a-Thon took place under the Palace Rotunda, where nearly a thousand professional and amateur Ukulele players, led by Ben Ahn, Hana hou 100, and Hiram Kaailau Bell, performed for onlookers in a salute to this amazing instrument, first introduced to the United States at the PPIE, sparking a “Uke” craze throughout the nation.