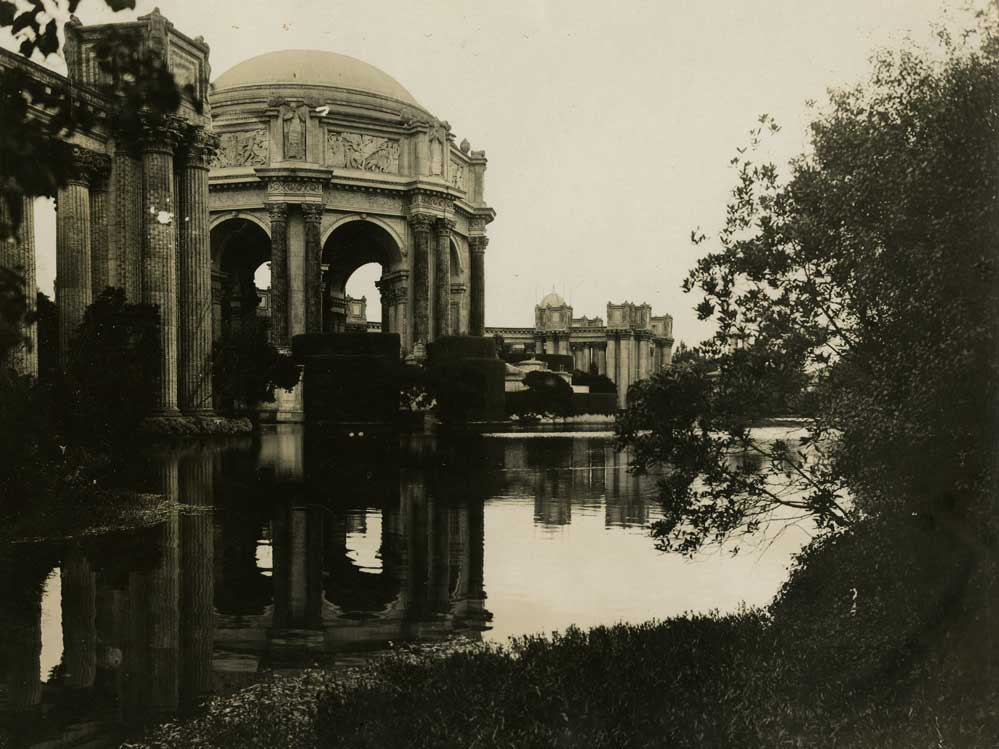 This essay is excerpted with permission from Gary Kamiya’s excellent book Cool Gray City of Love: 49 Views of San Francisco (Bloomsbury, 2013). To learn more about the architectural legacy of the Panama-Pacific International Exposition, visit the California Historical Society on Wednesday, April 22 for Inventiveness and Innovation: Contemporary Architects and the Influence and Impacts of Architecture and Architects of the 1915 World’s Fair, a panel discussion with Hans Baldauf of BCV Architects, Marc L’Italien of EHDD, and Jay Turnbull of Page Turnbull, moderated by John King, urban design critic at the San Francisco Chronicle.

The Temple: The Palace of Fine Arts, Lyon and Bay Streets

The beauty of the Palace of Fine Arts is inseparable from its strangeness. A vast, purposeless rotunda supported by mighty Corinthian columns and surrounded by a mysterious, vaguely ruinlike colonnade, it looms above its tranquil lagoon like one of those illogical, pseudo-classical structures that appear in the backgrounds of baroque paintings. The Palace is so familiar that it is easy to forget that it is a folly. And like the other members of that peculiar architectural genre, it is a mood enhancer, as much a drug as it is a building.

The Palace of Fine Arts is the only on-site survivor of one of the most delirious miniature cities ever created, the joyously ephemeral Panama-Pacific International Exposition of 1915 that announced the rebirth of San Francisco from the 1906 catastrophe. Magnificent courts—the Court of the Universe, the Court of Abundance, and the Court of Four Seasons—adjoined a pleasure strip called “The Zone,” which featured enormous models of the Grand Canyon, Yellowstone, and, in a more modest vein, the Creation. The crown jewel—literally—of the fair was the Tower of Jewels, a 435-foot structure decorated with 102,000 cut-glass “novagems” that at night turned into a vast, glittering diadem. Not until Burning Man—which started on Baker Beach, just around the seafront corner from the fair’s site—would the world see another fake city so dazzlingly psychedelic.

The Palace was so beloved that a movement to preserve it started while the Exposition was still going on. It was saved, but it had not been built to last, and in 1965 it was completely rebuilt. It is appropriate that the Palace is the last building on the site of the last of the great world expositions. For it is a shrine to absence, a tribute to a vanished world, a concrete manifestation of things unseen.

The Palace’s architect, Bernard Maybeck, was charged with creating a building that would serve as a kind of decompression chamber for fairgoers, a mind-calming passageway between the crowded and chaotic fairgrounds and the paintings and sculpture housed in a hall behind the Palace. Maybeck drew his inspiration from the 18th-century Italian artist Giovanni Piranesi’s atmospheric etchings of Rome, in particular his etching of the collapsing, overgrown ruin of the Temple of Minerva Medica. He was also deeply influenced by Isle of the Dead, the eerily evocative painting of a surreal funerary island by the 19th-century Swiss symbolist painter Arnold Böcklin.

Both works captured the emotion that Maybeck was searching for, a feeling he called “modified melancholy” or “a sentiment in a minor key.” But as Maybeck noted in the fascinating little book he published about creating the Palace, Böcklin’s painting was too sad to serve as an “art gallery frontispiece,” just as a Greek temple set on a wild island surrounded by stormy seas and mighty cliffs would be too terrifying and uncanny. Maybeck’s solution was to place his Greek temple (the Greeks did not have domes, but for the visionary Maybeck that fact was irrelevant) on “the face of a placid lake, surrounded by high trees and lit up by a glorious full moon.” This temple, he wrote, “would recall the days when your mother pressed you to her bosom and your final sob was hushed by a protecting spirit hovering over you, warm and large.” It would achieve a “transition from sadness to content.”

As they wander around the Palace and its lagoon—for its magnificent setting is an inseparable part of it—some may feel the sense of a protecting maternal spirit. The Palace has never had that particular effect on me. But it could, because it offers every other effect.

For Maybeck achieved his goal. He created a building so mysteriously evocative, so perfectly balanced between nature and artifice, reflection and joy, sadness and content, that it is like a giant mood ring. Its appearance depends not only on what time of day you see it but on what emotions you bring to it. The associations it evokes are infinite: a granite peninsula in a High Sierra lake; the endless vegetation-tangled ruins in Termessos, Turkey; the altar of a kindly god, who left it as a gift after a brief visit here.

Who are those mysterious downward-looking women atop the colonnade, their faces turned away? Are they symbols of mourning? Or symbols of searching? Do they sum up the entire building, an impossible, Orpheus-like attempt to bring back the dead? Are they embodiments of time itself, which disappears even as we try to seize it?

Maybeck never explained. But in a way, perhaps he did. After noting that “the artist began his work a long time ago in a nebulous haze of whys,” Maybeck wrote that he must work for a long time before he realizes that he is not aiming at an object, but at “a portrayal of the life that is behind the visible.”

The life that is behind the visible: Maybeck’s words recall those of another great Romantic, a young poet who in the face of his own impending death used an ancient urn to celebrate the eternal spirit of art:

Heard melodies are sweet, but those unheard

Like Keats’s “Ode on a Grecian Urn,” Bernard Maybeck’s Palace of Fine Arts is an elegy so profound that it takes its own place in the pantheon it extols. Like the urn, and the poem about the urn, it says to all those who stand before it,

“Beauty is truth, truth beauty,—that is all

Ye know on earth, and all ye need to know.”