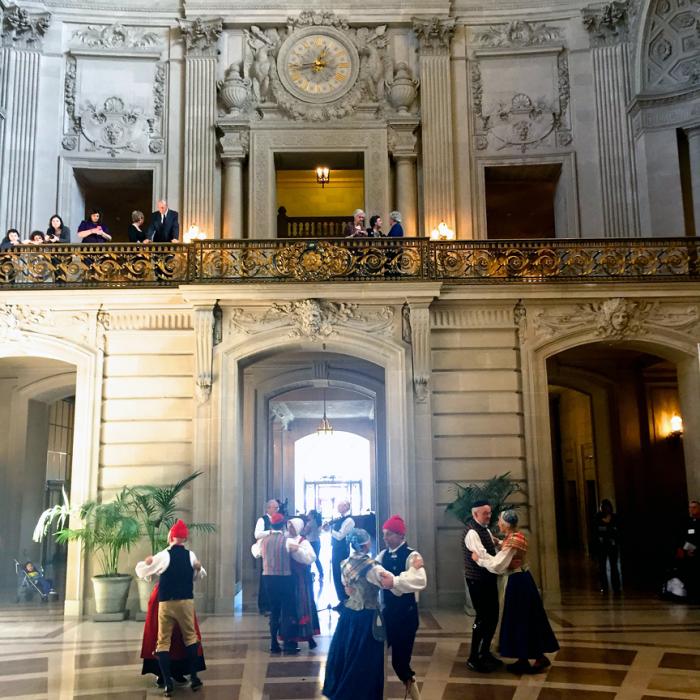 Celebration of the centennial of the 1915 World’s Fair began early the week before the official opening when Chairman Scott Schulkin of Fylgia Lodge (VOA#119) produced one of the first events in the renovated Swedish American Hall. This was an event describing Swedish immigration to the San Francisco Bay Area from the Gold Rush of 1849 until 1915, presented by Sven-Ove Westberg and Carol Martin, who included the interesting tale of her immigrant Swedish family among the Sioux of North Dakota who became fluent in the language and the ways of these native American people.

The inauguration of the commemoration of San Francisco’s second of three world’s fairs — the Panama-Pacific International Exposition (PPIE) of 1915 — was held in the beautiful rotunda of San Francisco’s City Hall on February 20, 2015. Dance troupes initiated the celebration, with Swedish dancers from the Bay Area and Sweden. Gamelan Sekar Jayan with traditional Balinese (a province of Indonesia) dances and Margaret Jenkins Dance Company performed, too. Julie Mushet, producer of the dance event and director of World Arts West, introduced Sweden’s Consul General Barbro Osher, who remarked on how appropriate it was to bring together participants from Asia and Europe, just as the fair itself united the Old World here in the Wild West.