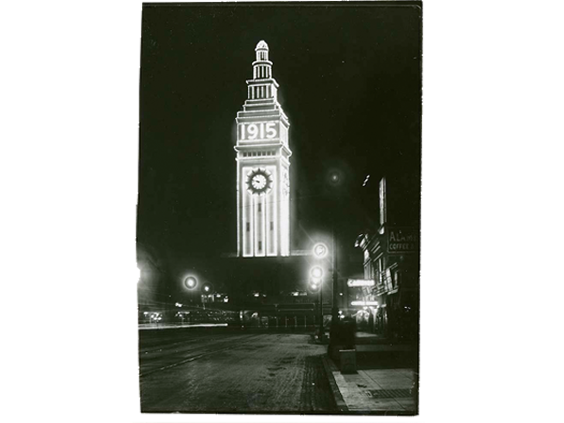 San Francisco, Calif. (March 3, 2015) – This evening one of San Francisco’s most treasured landmarks – the Ferry Building – is once again adorned in lights with the numbers “1915” boldly illuminated on its tower, another special event as part of the centennial celebration of the 1915 Panama Pacific International Exposition (PPIE100).

Several hundred World’s Fair admirers, dignitaries and historians, many dressed in 1915 attire, were entertained by San Francisco ragtime singers as the Ferry Building Tower was re-lit to appear as fairgoers would have seen it in 1915 when arriving in San Francisco, many by ferry, to attend the World’s Fair. San Francisco mayor Ed Lee, former Mayor Willie L. Brown, Chief of Protocol Charlotte Shultz, Donna Ewald Huggins, and Bay Area philanthropist Tad Taube helped turn on the lights during a special ceremony.

“The Ferry Building at the Port of San Francisco is a shining jewel welcoming visitors and residents to our City and our world class waterfront,” said Mayor Ed Lee. “As part of the centennial celebration of the San Francisco Panama-Pacific International Exposition, we celebrate the Ferry Building’s important role in welcoming millions of visitors who arrived in San Francisco by ferry for the World’s Fair.”

The Ferry Building Light Project was orchestrated by Huggins, Mayor Lee’s PPIE100 liaison, and was supported by Lee, Shultz, Brown, the Port of San Francisco and the Ferry Building. Huggins, who is a 1915 World’s Fair historian and collector, secured funding for the light project through private sources including Tad Taube, the founder and chairman of Taube Philanthropies, who provided a major grant to fund the lighting. The lights will illuminate the Ferry Building tower from March 3 through December 4, the day the World’s Fair closed a century ago.

“Through the generosity of fair admirers and supporters we are thrilled to bring a piece of the World’s Fair back to San Francisco in such a spectacular way,” said Huggins. “This shining beacon will be a constant reminder to visitors and residents of the many amazing centennial events and exhibits they can experience throughout the year.”

Taube, who also gave $2 million to Bay Lights, a project to illuminate the Bay Bridge added, “The 100th anniversary of the 1915 Panama-Pacific International Exposition — which was a citywide commemoration that put San Francisco on the world map — is cause for celebration, and we are doing just that with light and splendor across our beautiful city. Our work with Bay Lights inspired us to also become involved in the Centennial festivities of lighting the Ferry Building and Palace of Fine Arts.”

Jim Phelan, owner of J.C. Phelen & Son, a fourth-generation steeplejack, created and installed the 1915 numbers, which have been placed on the north and south sides of the Ferry Tower. The numbers span nearly 27 feet wide, each nearly 12 feet high. Phelan worked with Metropolitan Electric to install nearly 1,100 LED low wattage light bulbs, designed to match those placed on the Ferry Building back in 1915. The bulbs have been placed on the entire span of the tower and can be seen from all sides.

The World’s Fair celebrated San Francisco’s recovery from the 1906 earthquake and its emergence as a center of world trade. Built in 1898, the Ferry Building was one of the few structures that amazingly did not suffer seriously damage during the 1906 earthquake.   In 1915, the Ferry Building served as a vital transportation hub, helping welcome more than 19 million people who came to San Francisco to attend the World’s Fair. Throughout the Exposition, its tower was festooned with lights and a beacon proclaiming “1915” to visitors on both sides of the Bay.

Last weekend, in conjunction with the February 20th Centennial anniversary of the 1915 World’s Fair opening, Mayor Lee kicked off a yearlong celebration of PPIE by officially re-opening the doors of the Palace of Fine Arts to the public during PPIE100 Community Day, which drew more than 10,000 visitors. One of the features was the special colored illumination of the Palace Rotunda, which was also supported by Taube and the Friend Family.

Inside the Palace, which is open to the public throughout the year, is Innovation Hangar, a unique social innovation space designed to be a place where thinkers, doers and critics can come together under one roof to facilitate connections, ideas and investments in a way that simply cannot happen in the virtual world. Innovation Hangar features new inventions and prototypes, hands-on educational activities and amazing exhibitions from Bay Area Discovery Museum, Kaboom, Smithsonian’s Lemelson Center, Maker Media and Wearable World, among others. The California Historical Society is also featuring a 10,000 sq. ft. exhibition “City Rising: San Francisco and the 1915 World’s Fair” that shares the rich and remarkable history of the PPIE.

Just a few blocks from the Ferry Building, visitors can also experience the amazing history of the World’s Fair with the California Historical Society’s full City Rising exhibition at its 678 Mission Street headquarters. Open through January 2016, the exhibition is a stunning jewel-box show, highlighting the Fair’s history, beauty, complexity, that includes many artifacts, memorabilia and film from the World’s Fair. There, visitors can also purchase a commemorative book, San Francisco’s Jewel City, 352 pages with over 200 full color photographs and illustrations written by local author and historian Laura Ackley and published by Heyday and CHS.