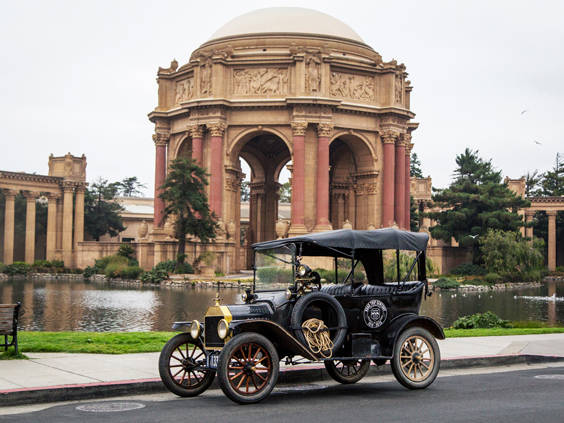 Arrival at Palace of Fine Arts Marks the end of the Road Trip Century Celebration; a 34-day, 3,500+ mile road trip across the country that followed Edsel Ford’s 1915 journey from Detroit to San Francisco

SAN FRANCISCO, Calif. (Aug. 19, 2015) – In celebration of the Centennial of the Panama Pacific International Exposition and a century of road travel across America, the Historic Vehicle Association (HVA) joined automotive and 1915 World’s Fair enthusiasts at the Palace of Fine Arts today, to welcome the arrival of a historic 1915 Ford Model T, after it traveled more than 3,500 miles, recreating the amazing cross country journey that Edsel Ford took one hundred years ago.

The purpose of the trip was to elevate national awareness concerning the importance of our nation’s automotive heritage and the role of the Ford Model T in shaping America. The HVA road trip was both a celebration and important heritage fieldwork regarding the birth of a century of American road trips.

In the summer of 1915, 21-year-old Edsel Ford, the only son of Henry Ford and six boyhood friends were among the thousands of Americans that took to the road to visit the west and the world’s fair exposition in San Francisco.  At the PPIE, the Ford Motor Company had one of the most popular exhibits at the fair – a working Model T assembly line that produced about 18 cars each afternoon and more than 4,000 Model Ts during the course of the World’s Fair. The whereabouts of the original Edsel Ford Model T is not known.

HVA’s “Road Trip Century Celebration” was launched on July 17th with a HVA driving team using a refurbished 1915 Ford Model T similar to the one Edsel Ford drove, following his epic 1915 journey from Detroit to San Francisco.   HVA collaborated with the Antique Automobile Club of American Library, the California Historical Society and PPIE100, to plan and recapture this amazing historical journey.

“The trip has provided the HVA team with a greater appreciation of the development of our national road system and those early pioneers who experienced cross-country travel by automobile,” said Mark Gessler, President of the Historic Vehicle Association. The excitement and enthusiasm of all the people we met as we traveled through small cities and towns was a wonderful experience. The smiles, the memories and the Model T stories we heard made this trip very special.”

Throughout the journey the HVA met with historians, heritage specialists, preservationists and academic experts to help trace the origins of the American road trip.”

Edsel Ford’s trip was extremely well documented with nearly 200 photographs and daily journal entries. The HVA considers it one of the most well documented early American road trips done purely for pleasure.

He traveled through developing roads that were deemed “drivable” at the time. And, for the first time, one could consider a cross-country trip via the automobile.

“Edsel Ford’s cross-country journey is symbolic of how the PPIE brought out the amazing spirit, enthusiasm and innovation of so many people,” said Phil Ginsburg, General Manager of the San Francisco Recreation and Parks Department, which is overseeing the City’s PPIE100 celebration. “We are so proud to welcome the HVA to San Francisco as it concludes this epic journey to recreate what was an important milestone with historical significance from 1915.”

“Edsel Ford’s road trip is one example of the lure of the PPIE that was seen and felt across the country and around the world,” said Dr. Anthea Hartig, Executive Director, California Historical Society.  “In 1915, America was at the dawn of a new age of connectivity and the automobile was at the forefront of this shift in society. We are thrilled to participate in the conclusion of the Centennial Road Trip and to honor the enduring legacy of the PPIE.”

The entire Road Trip Century Celebration can be viewed at drivehistory.org.  For more information about PPIE100 and events, activities and the history of the 1915 World’s Fair, visit PPIE100.org.

About the Historic Vehicle Association (HVA):  The HVA is dedicated to preserving and sharing America’s automotive heritage. In 2014 the HVA established the National Historic Vehicle Register program working with the U.S. Dept. of the Interior and Library of Congress to document historically significant automobiles in America’s past. The HVA supported by nearly 400,000 individual historic vehicle owners and corporations such as Shell Oil Products U.S., Quaker State, Hagerty, Ford Motor Company as well as individual benefactors.  The HVA is grateful to all those that have donated their time and resources to make the 2015 Road Trip Century program possible.

About PPIE100:  February 20, 2015 marked the 100th anniversary of the Panama-Pacific International Exposition (PPIE), the World’s Fair celebrating the completion of the Panama Canal and showcasing San Francisco—its recovery from the ashes of the 1906 earthquake and fire and its world trade potential. Throughout 2015, the PPIE100, a citywide consortium of cultural, civic, and historical organizations, will conduct centennial programs, events and exhibitions to commemorate the PPIE’s historical significance and to reflect on its legacy, all collaborating on what San Francisco Mayor Edwin M. Lee described as “a uniquely San Francisco way to celebrate a centennial—to focus on then, now and the future.”  PPIE100 organizing partners include the California Historical Society, Innovation Hangar, Maybeck Foundation and San Francisco Recreation and Parks Department.  AT&T is the presenting sponsor with other major support provided by Hearst Corporation, Wells Fargo, Ford, Henry Mayo Newhall Foundation and Sterling Bank/Seligman Family Foundation. Learn more:  www.PPIE100.org.  Follow PPIE100 on Twitter and Facebook @PPIE100.