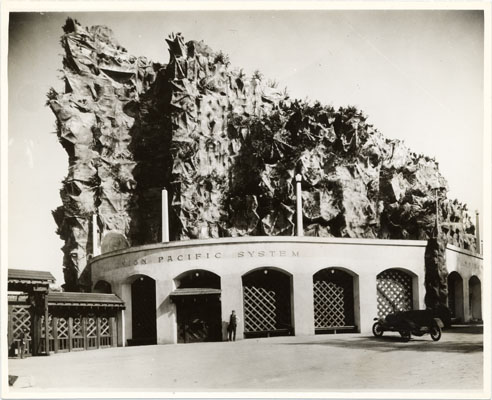 On the occasion of the conference Science for Parks, Parks for Science: The Next Century held this week at the University of California Berkeley, let’s take a look at two spectacular exhibits of National Parks at the Panama-Pacific International Exposition.  Laura Ackley documented the National Park concessions in San Francisco’s Jewel City:

After passing between the high, steep walls of a simulated canyon, patrons entered the wide-open expanse of the Yellowstone Park concession, built by the Union Pacific Railroad. Directly before them was a circular depression 250 feet across in which lay an enormous relief map of the park. Visitors could lean over a rock wall and peer down onto three-dimensional reproductions of mountains, hot springs, and lakes. Dotted around the basin were lampposts sculpted like gushing geysers.

The theme continued in the 1,000-seat Geyserland Spectatorium, hidden behind the rocky cliffs of the entrance. There a copy Old Faithful ejected a great column of boiling water, steam, and spray every twenty minutes while colorful lights played across the dazzling plume. Nearby, 10,000 gallons of water per minute roared over an eighty-five-foot-high copy of Yellowstone Falls. Hardier fairgoers could hike a quarter-mile-long path, ascending a fern-lined mountain trail past marvelous “lava” formations to the high crags surmounting the park.

At the back of the concession, the rustic replica of the Old Faithful Inn provided dining in an immense, elegantly appointed room that could seat 2,000. Society folks often hosted glittering banquets at the restaurant, where fifty-six cooks were kept busy. There, said one brochure, one could feast “on the best things in the world while seated in a veritable dreamland and listening to the choicest music.” The railroad had underwritten the costs of twice-daily performances by the eighty-man Exposition Orchestra that took place when the ensemble was not playing in the Festival Hall or accompanying the famous visiting conductors, dancers, and vocalists.

A long, low building resembling an adobe mission was the home of the “Grand Canyon of Arizona,” built by the Atchison, Topeka & Santa Fe Railway. The entrance building held an office of the Daughters of the American Revolution and a gift shop run by the Fred Harvey Company, which displayed and sold “probably the largest and finest collection of Navajo blankets and Indian curios ever assembled at one place.”

Beyond the row of arches perforating the creamy, Spanish-style walls, passengers ascended a grand stairway onto a loading platform designed to look like El Tovar, the great hotel on the Grand Canyon’s rim. Guests boarded one of eight full-scale, forty-passenger “observation parlor cars” for a virtual trip that simulated one hundred miles of the great chasm’s landscape within the six-acre replica. A New York scenic painter used clever perspective to mimic the mile-deep gorge on 30,000 square feet of linen canvas.

The rail cars were built with one side open;  riders sat facing outward as the electric-powered train traversed the canvas canyonscape for half an hour. As the train bumped gently along an elevated trestle, narrators described seven of the signature wonders along the route, including the Painted Desert and Bright Angel Trail, where mule trains descended toward the gushing river. To further the illusion, clouds floated between the walls of the canyon, and an electrical storm played brilliant flashes of lightning across the colorful rocks. While fanciful stone formations and gorgeous orange, gray, and purple geologic striations were the products of sculptors’ tools and painters’ brushes, the scent of sagebrush and dust in the air was real. The railroad had shipped twenty-six freight cars of desert material from the canyon to add to the verisimilitude of the attraction. The ride finished at a reproduction pueblo built of Arizona adobe, piñon pine, and red sandstone.

Though Yellowstone and the Grand Canyon were considered remarkable feats of scenic design, both operated at a loss. However, neither was required to make money, as they were essentially giant advertisements to draw passengers to the railroads serving the parks and were regarded as major successes in that light. 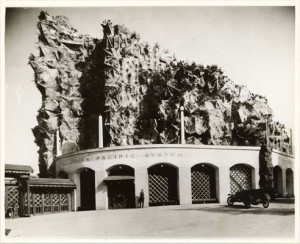 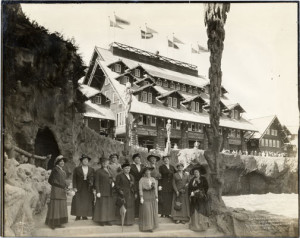 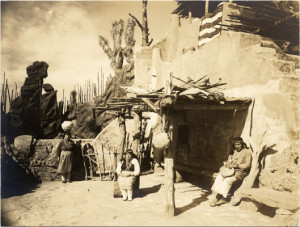 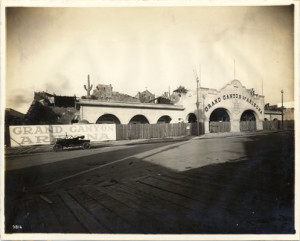