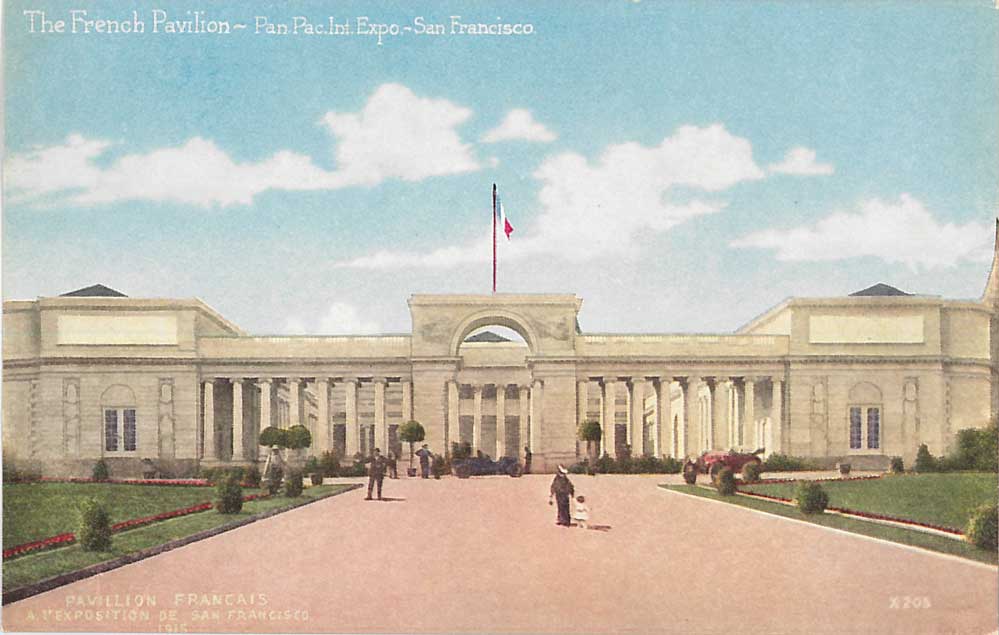 On this day in 1915 the Panama-Pacific International Exposition celebrated the dedication of the French Pavilion.

The building was modeled on the Palace of the Legion of Honor in Paris, and received significant support from Alma Spreckels who lent Rodin’s “Thinker” for display in the courtyard.

A catalog of exhibits displayed in the French Pavilion filled a thirty-six page booklet and included fine art by Manet, Monet, Constant, Cezanne, Rodin and Michelangelo, decorative arts, porcelains, rare books, furniture, Savonnerie rugs, tapestries, and souvenirs of Napoleon, Balzac, Hugo, Dumas and Rochambeau. A large gallery was set aside for Belgium, where models of Antwerp, Ghent, and Brussels were displayed in their pre-war condition.

After the fair, Alma Spreckels Alma Spreckels persuaded her husband, sugar magnate Adolph B. Spreckels, to recapture the beauty of the pavilion as a new art museum for San Francisco. At the close of the 1915 exposition, the French government granted them permission to construct a permanent replica, but World War I delayed the groundbreaking for this ambitious project until 1921. In a statement delivered to the Board of Park Commissioners on 5 January 1920, Adolph B. Spreckels declared it was the purpose of “my wife and myself to contribute to the beautification of our native city something not only beautiful in itself, but also something devoted to patriotic and useful ends: something which might be dedicated as a suitable memorial to our brave boys who gave their lives to their country in the Great War, and also lend itself, as a home of art and historical treasures, to promoting the education and culture of our citizens, and especially the rising and coming generations.”

Learn more about the history of the Legion of Honor at legionofhonor.famsf.org.

This June, Alliance Française will host an exhibition and events remembering the French contributions to the PPIE.