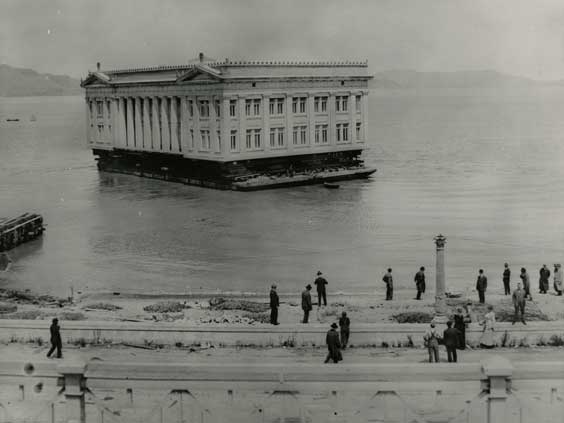 On this day in 1915 Ohio Day was celebrated at the Panama-Pacific International Exposition.

The Ohio Building was a copy of the Ohio State Capitol building in Columbus – absent the dome – and was designed by Dayton architect Albert Pretzinger. The first floor was devoted to entertainment, with twin reception rooms, rotunda, and assembly room. The second floor held a suite for the governor, complete with kitchen and dining room. The opposite wing help six bedrooms and a smaller kitchen and dining room for the commission and staff.

When the fair closed the building brought $1,000 at auction. It was mounted on skids and dragged to the marina where it was pulled aboard two barges and prepared for a voyage to San Carlos.

On August 16, 1916 the San Francisco Chronicle reported that: “At 8 o’clock this morning the Ohio building, a relic of the exposition, will float past the Ferry building on a twenty-three mile voyage down to San Carlos. Everything is in readiness for one of the strangest spectacles ever witnessed on San Francisco bay. Yesterday the big thousand-ton building was successfully moved from its site on the exposition grounds and mounted on a number of barges, lashed together, off the exposition waterfront.

Marin county commuters, passing in sight of the dream city of 1915, marveled at the picture of one of the exposition’s biggest host buildings floating on the water. Two tugs will tow the building to its new site, where it will become home of the Peninsula Country Club of San Carlos.

Considering the length of the voyage and the proportions of the building, the undertaking is regarded as one involving unusual engineering features. The building is 131.5 feet long, eighty feet wide, and forty-three feet high.”