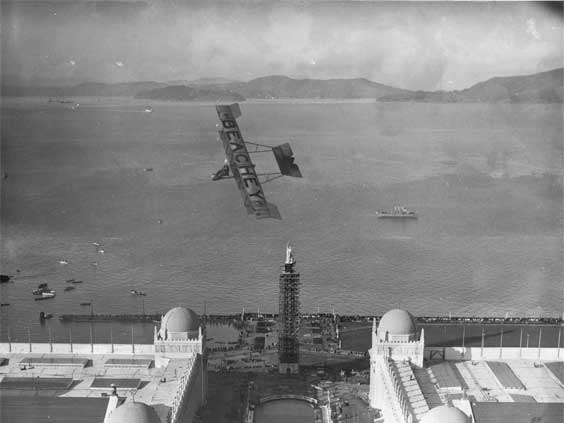 On this day in 1915 the Panama-Pacific International Exposition celebrated Contra Costa County and Tehama County Day. Art Smith, the Boy Aviator, made his inaugural flight as the Exposition Aviator on the evening of April 3, 1915. During his audition, the 20-year-old from Indiana completed fourteen consecutive loop-the-loops.  The San Francisco Chronicle reported that “Smith, who is all boy in looks, manner, talk and disregard for is bones, went up in the teeth of a gale that made the grass lie flat on the lawns and made every flag in the Exposition stand out like a board, went up as nonchalantly as any society headline steps into her safely moored box at the polo games. He scorned gloves, goggles and sweaters, leather coats and head harness and all the other scenery of the aviator.”

The first exposition aviator was Lincholn Beachey, whose pioneering adventures made him an instant celebrity. He was the original barnstormer in the country (he was the first pilot licensed by the Wright brothers), and he was the first the fly the loop-the-loop, buzz the White House, the Capitol Dome, and the Washington Monument. He was known as “the man who owns the sky.” Less than a month after the opening of the PPIE, Beachey crashed into San Francisco Bay and perished. He was a native of San Francisco, and his funeral was one of the largest in the city’s history.

Charles Niles arrived in San Francisco in August of 1915. He earned fame earlier in the year for flying against Pancho Villa’s revolutionary forces in Mexico. He flew briefly – and crashed repeatedly – at the PPIE, and his crowning achievement was winning a race against the speedboat “Oregon Kid” on November 2nd.

Paraguayan aviator Silvio Pettirossi also flew at the PPIE. He thrilled the crowd when a broken steering wire caused him to land in the water near the South end of the Boathouse. He was unharmed and his plane suffered minimal damage.

Other aviators included Silas Christofferson, Arthur Rybitzky, and Robert Fowler who received a license to operate a passenger concession at the fair, but wrecked both of his seaplanes before carrying a single fare. His place was taken by Alan and Malcolm Loughead who flew fares to Fort Point, across the Golden Gate, to Sausalito and back to the Exposition – a ten minute ride for ten dollars. During their fifty-day run they carried over six hundred passengers and cleared $4,700. After the fair the brothers founded an aircraft company in Southern California with the name Lockheed.

Discover more aerial history at the SFO Museum’s current exhibition Fancy Flying: Aviation at the 1915 Panama-Pacific International Exposition, on view through October 18 in the International Terminal at SFO.