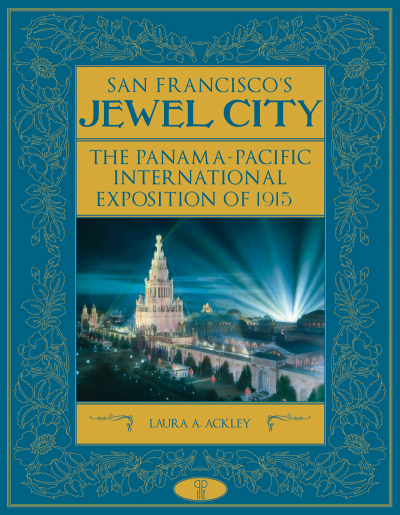 This lavishly illustrated volume is as much a triumph as the fair itself. San Francisco’s Jewel City takes readers on an in-depth tour of the PPIE, revealing the dramas of constructing the fair and the wonders that awaited within the palace walls: electrical home appliances, specimens of luminous radium, living dioramas of then little-known cultures and, of course, a model of the world-changing Panama Canal.

2015 marks the centennial year of the Panama-Pacific International Exposition, when host city San Francisco emerged from the ashes of earthquake and fire as a center of beauty and progress. On the Presidio’s waterfront and in what is now the Marina District, courtyards, formal gardens, and eight Beaux-Arts palaces made up a miniature city resplendent in tones of golden-orange, copper green, cerulean, and “Pompeiian red.” Each palace hosted a thrilling array of exhibits and events that showed off the young century’s achievements and possibilities. Over it all, the forty-three-story Tower of Jewels cast the reflected light of one hundred thousand pieces of colored glass.

Laura Ackley’s compelling text is unparalleled in its breadth of scope and richness of detail, providing social and political context for the fair and offering insight into its legacy today.

The California Historical Society and Heyday will officially unveil the book at a San Francisco book signing and launch event with author Laura Ackley on Thursday, December 4 from 6:00 to 8:00 p.m. at the California Historical Society, 678 Mission Street. The author will provide a lecture on the “Whirlwind Tour of the Panama-Pacific International Exposition” and take the audience on an amazing tour of the Fair from its original concept in 1904 through its development and all the way to its gala opening in February 1915. The event is free for CHS and Heyday members with $5.00 general admission. Please RSVP to : JewelCitySF.Eventbrite.com.

About the Author: Laura Ackley, widely known for her expertise on the 1915 World’s Fair, first became interested in the PPIE during an undergraduate course at UC Berkeley. After completing her master’s degree in architecture at Harvard she returned to Berkeley to research the PPIE for a second master’s degree in architectural history and theory. Ackley specializes in 3D visualization of historic architecture and has taught 3D modeling and animation for eighteen years. She lives in the Bay Area.

About PPIE 100: February 20, 2015 marks the 100th anniversary of the Panama-Pacific International Exposition (PPIE), the World’s Fair celebrating the completion of the Panama Canal and showcasing San Francisco—its recovery from the ashes of the 1906 earthquake and fire and its world trade potential. Throughout 2015, the Centennial Celebration of the Panama-Pacific International Exposition, a citywide consortium of cultural, civic, and historical organizations, will conduct yearlong programs to commemorate the PPIE’s historical significance and to reflect on its legacy. Learn more at PPIE100.org

About the California Historical Society: The California Historical Society is a 143-year-old, non-profit organization with a mission to inspire and empower people to make California’s richly diverse past a meaningful part of their contemporary lives. We hold one of the top research collections on California history, which includes over 35,000 volumes of books and pamphlets, more than 4,000 manuscript collections, and about 500,000 photographs documenting California’s social, cultural, economic, and political history and development, including some of the most cherished and valuable documents and images of California’s past. Learn more at californiahistoricalsociety.org.

About Heyday: Heyday is an independent, nonprofit publisher and unique cultural institution. We promote widespread awareness and celebration of California’s many cultures, landscapes, and boundary-breaking ideas. Through our well-crafted books, public events, and innovative outreach programs we are building a vibrant community of readers, writers, and thinkers. Learn more at www.heydaybooks.com.