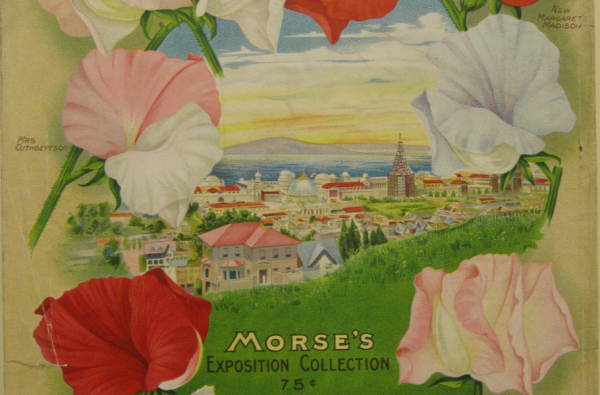 The spring edition of Boom: A Journal of California takes a look at California’s enduring connection to the Pacific, in 1915 and 2015, and looking forward to 2115. In an essay titled “The Lotus and the Rose: Californians plant a world in 1915,” Elizabeth Logan examines how the idea California’s agricultural abundance and the positioning of San Francisco as a center of American political and economic power were displayed at the Panama-Pacific International Exposition through elaborate horticultural displays:

In June 1914, Golden Gate Park Supervisor John McLaren and his team of landscape engineers placed an enormous order: 7,000 rhododendrons, 200,000 daffodil bulbs, 158,000 tulips, 45,000 anemones, 23,000 ranunculus, and 15,000 hyacinths. Those flowers and the thousands more they would order over the following eighth months were needed to meet an audacious goal: to re-create the entire world within the grounds of the Panama-Pacific International Exposition that would open in February 1915. They aimed to construct “a microcosm so nearly complete that if all the world were destroyed except the 635 acres of land within the Exposition gates, the material basis of the life of today could have been reproduced” from the examples. California’s soil and climate would provide the connective tissue.

The project was a rousing success. Between the blooms McLaren and his team nurtured and the other gardens and exhibits on site, flowers and plant life defined the experience of the exposition for many; after the fair, novelist and lecturer Peter Clark MacFarlane of New York City reflected on his visit: “The Exposition was a perfect flower.”

Read the full essay online at Boom: A Journal of California.