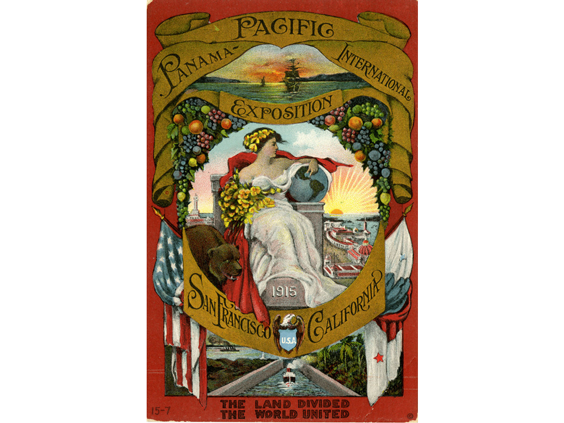 The recent gala marking the centennial of the Panama-Pacific International Exposition (PPIE) in San Francisco and two just ended international gatherings in Panama reflect contrasting visions of global connections in Panama and from our Golden Gate today just as they did a century ago.  The opening of the Canal in 1914 was the ideal occasion for holding the first world’s fair in the Asia-Pacific region.  Our earthquake ravaged city showed that it could still dazzle and had the energy and resources to be the centerpiece for the burgeoning Pacific Rim commerce that promised to transform the global economy.  It also clearly confirmed expectations of the dawning American century and helped make San Francisco the logical site for the chartering of the United Nations just two decades later.

In Panama the prospects were much more modest at that time, despite the memory of a glorious past.  The Isthmus had actually hosted what may have been the first large scale Asia-Pacific markets at Portobelo for almost 200 years as the Spanish Empire’s transfer point for South American treasure and trade goods from Spain’s Asian colonies.  In the 1750s the rise of British mercantilism and the collapse of the Spanish Empire doomed Panama to over a century of decline relieved only temporarily by building the Panama Railroad during our Gold Rush and the French canal project in the 1880s.

As the first World War erupted, the newly independent little republic of less than half a million people was actually concentrating on building its first comprehensive high school and modern government building, while sending a handful of the brightest young people to college abroad with the $10 million windfall the U.S. paid for canal rights.  While few Panamanians had been involved in canal construction or the bustling U.S. Canal Zone, the people still hoped that the opening of the passage to shipping would enable them to restore their crossroads commerce and some of the prosperity the region had once known.

The global outlook of these two great centers of the Pacific Rim may be just as contrasting today.  The centennial celebration unmistakably reflected our nostalgic recollection of our city’s global coming of age and all that has come in its wake.  The participants in the celebration cheerily donned the costumes of the era, were regaled with music of the time and rightly took great pride in the exhibits that reflected the valor of their rebuilt city and the beauty of the Palace of Fine Arts.  And right in sync a few days later, the San Francisco Chronicle featured Gary Kamiya’s riveting story from the Cuban-Spanish-American War.  He recounts how in 1898 the Bay Area-built U.S.S. Oregon’s historic voyage first ignited the Panama Canal fever that President Teddy Roosevelt exploited to launch the construction of that engineering marvel.  Yes, we have been on top of the world for 100 years.

Still in our time, Panama City hosted the 7th Summit of the Americas and the 12th Panama Maritime Exhibition in April.  The big news from the Summit, besides the presence of Cuba for the first time, was the signing, in front of President Obama, of the COPA Airlines deal to pay $6.6 billion for 61 new Boeing aircraft that will help complete plans for making Panama’s Tocumen Airport the new air hub of the Americas.  At the Maritime Conference top billing went to the announcement that three new port projects will add the ability to handle over 6 million more containers (TEUs) – about the current capacity of the largest U.S. port – as well as a series of other mega projects inspired by the expansion of the Panama Canal which will be completed next year.  Yes, in Panama they are thinking more about the next 100 years.

Gene E. Bigler is a consultant and writer. He graduated from the University of the Pacific, earned M.A. and Ph. D. degrees from The Johns Hopkins University School of Advanced International Studies (SAIS) and was a Fulbright Scholar at the University of Ecuador in Guayaquil. As the Counselor for Economic and Political Affairs at the U.S. Embassy in Panama, 2000-2003, he was the chief “Canal watcher” after the transfer to Panama and helped develop a series of new agreements with Panama. He maintains close relations with the Panama Canal Authority and in 2013-2014 served as a consultant on geostrategic issues. In the Foreign Service he was Foreign Affairs Advisor to the US Coast Guard and had tours in Lima, Havana, Rome, Baghdad, and Washington, DC. After retiring, he was Visiting University Professor-Practitioner of International Relations at Pacific from 2005 to 2012 and still lives in Stockton. Earlier in his career he was a professor at the Instituto de Estudios Superiores de Administracion (IESA) in Caracas, Venezuela, a professorial lecturer at SAIS, and professor of history and political science at Hendrix College in Conway, Arkansas.