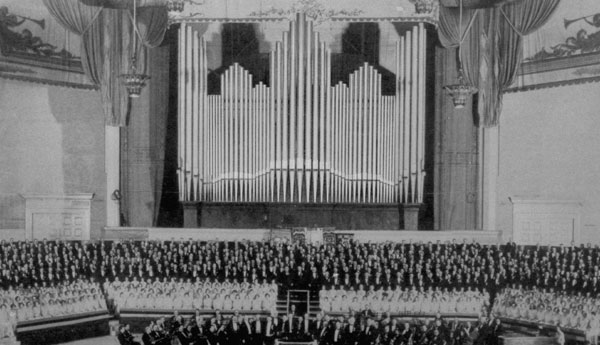 The musical program of the Panama-Pacific International Exposition provided a robust array of melodic offerings, including military-style bands, orchestras, choral groups, operatic and concert singers, dancers, instrumental soloists, chamber ensembles, and student groups. One of the most significant musical components of the Fair was a 7,000-pipe, forty-ton organ created by the Austin Organ Company. Installed at the Festival Hall, the organ was enjoyed by hundreds of thousands of visitors to the Exposition. After the fair, the organ was given to the City of San Francisco and was installed at the Exposition Auditorium (now the Bill Graham Civic Auditorium), where it was rededicated in 1917 by the most famous organist of the early 20th century; Edwin H. Lemare.