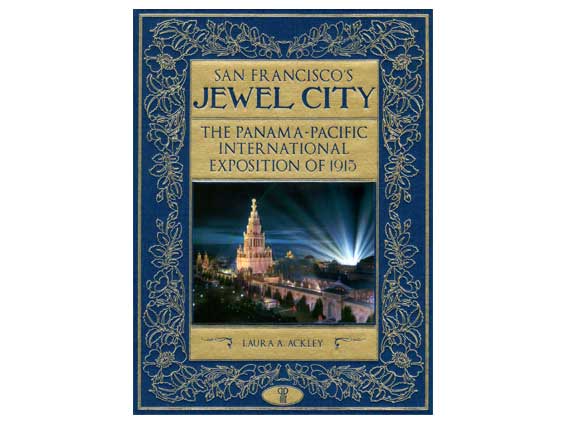 A richly illustrated panoramic tour of the PPIE from its historical inception to grand opening featuring its magnificent architectural and technological features, thrilling exhibits, diverse cultural dioramas and events, and the extravagant spectacles that drew hundreds of thousands of attendees over 10 months.

2015 marks the centennial year of the Panama-Pacific International Exposition, when host city San Francisco emerged from the ashes of earthquake and fire as a center of beauty and progress. On the Presidio’s waterfront and in what is now the Marina District, courtyards, formal gardens, and eleven Beaux-Arts palaces made up a miniature city resplendent in tones of golden-orange, copper green, cerulean, and “Pompeiian red.” Each palace hosted a thrilling array of exhibits and events that showed off the young century’s achievements and possibilities. Over it all, the forty-three-story Tower of Jewels cast the reflected light of one hundred thousand pieces of colored glass.

This lavishly illustrated volume is as much a triumph as the fair itself. San Francisco’s Jewel City takes readers on an in-depth tour of the PPIE, revealing the dramas of constructing the fair and the displays of culture and industry that awaited within the exposition walls: electrical home appliances, rides in a homemade airplane, a world tour of twenty-one international pavilions, luminous radium crystals, and, of course, a model of the world-changing Panama Canal. Along the way, we meet famous (and infamous) visitors, such as Theodore Roosevelt, Helen Keller, Thomas Edison, and Buffalo Bill Cody. Historian Laura A. Ackley’s compelling text is unparalleled in its breadth of scope and richness of detail, providing social and political context for the fair and offering insight into its legacy today.

San Francisco’s Jewel City is published by HEYDAY with the CALIFORNIA HISTORICAL SOCIETY.

The Book Club of California
In 1912, a group of San Francisco bibliophiles proposed an exhibition of locally produced fine press books for the forthcoming Panama-Pacific International Exposition. When advised that their proposal would carry more weight if made by an official organization, they founded the Book Club of California.
Learn More
view more events