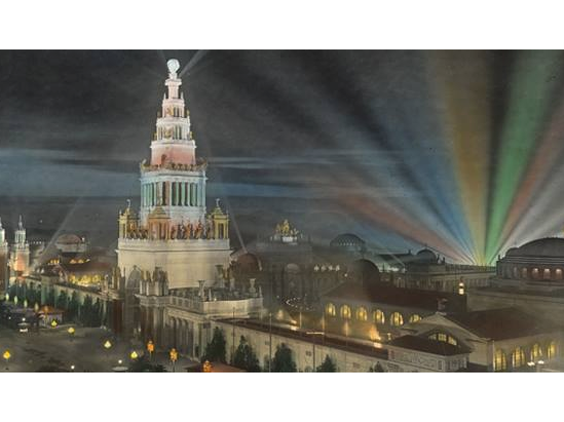 Farewell to the Panama-Pacific International Exposition

Laura Ackley holds graduate degrees from the Harvard University Graduate School of Design and the University of California at Berkeley College of Environmental design, as well as an undergraduate degree in architecture from Berkeley. Her interest in the Panama Pacific International Exposition was captured by a Cultural Landscapes course during her undergraduate years. Her book, San Francisco’s Jewel City: The Panama-Pacific International Exposition of 1915, co-published by Heyday and the California Historical Society, was awarded a Gold Medal at the 2015 California Book Awards sponsored by the Commonwealth Club. 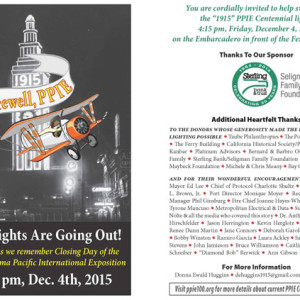 The Ferry Building Lights Are Going Out!

PPIE100
To commemorate the exact Centennial of the Closing Day of the Panama-Pacific International Exposition in 1915, the '1915' lights on San Francisco's Ferry Building are being turned off!

Please join us for a fun ceremonial salute to 'closing day' on the Embarcadero in front of the Ferry Building. There will be wonderful souvenirs to the first 500 attendees, music, a tribute to Lincoln Beachey, CC Moore and Sunny Jim Rolph, and surprises galore! Vintage attire is encouraged! 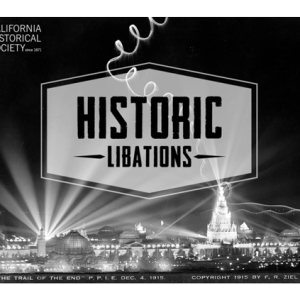 California Historical Society
December 4 marks the 100th anniversary of the end of San Francisco’s Panama-Pacific International Exposition. Join us in celebrating this remarkable event at Historic Libations, CHS’s annual holiday cocktail party. Sip California cocktails, legendary and obscure, toast to the history of mixed drinks, and commemorate the end of one chapter in California’s history and the beginning of another.
Learn More