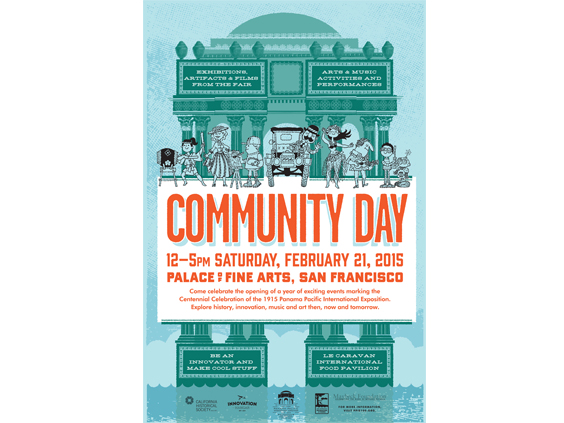 On February 20, 1915, the gates were thrown open to the Panama Pacific International Exposition, the official opening celebration of the newly completed Panama Canal. Hailed by some as the most wondrous world fair of all time, the PPIE boasted 635 acres of palaces, gardens, exhibitions, art and music, amusements, livestock shows, feats of daring, and innovations that heralded the future. Historic figures from all walks of life visited the fair, along with more than 19 million others during its nine month run. The PPIE also proclaimed San Francisco’s miraculous rebirth after the 1906 earthquake and marked California’s emergence as an international powerhouse and player on the Pacific Rim

On February 21, 2015, a day-long community event will honor the 100th anniversary of the opening of the Panama-Pacific International Exposition and will kick-off a year of Centennial events.  A variety of educational activities for families and adults are planned, along with viewing of exhibitions and entertainment.  The PPIE introduced the Ukulele to the United States, causing it to become the rage of its day. Lead by a Ukulele Band of local players, the community will be invited to bring their Ukes and play along.

7:00 – 10:00 PM: Palace After Dark. Stroll the Palace grounds– experience what it was like to be at the Exposition and enjoy a film and light installation by Optic Flare in the Palace of Fine Arts Theater lobby. Refreshments from local purveyors will be available for purchase. Made possible by a grant from Taube Philanthropies with additional funding from The Friend Family.

Additional Parking information can be found at the Presidio Trust.

PPIE100 Opening Weekend is made possible by the Hearst Corporation.