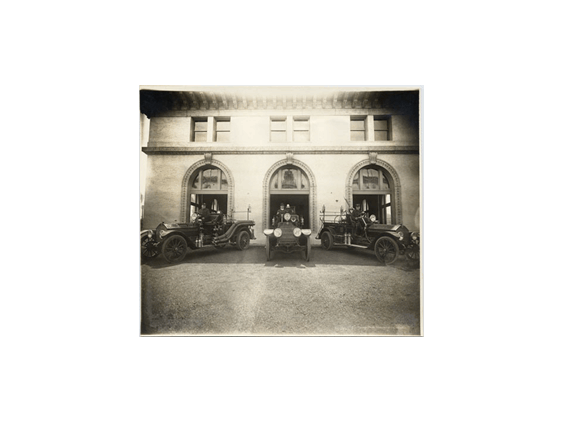 Celebrate the Centennial of Engine 35

As one of this year’s centennial celebrations of the 1915 (PPIE) Panama Pacific International Exposition, Engine 35 will celebrate the centennial of the Pier 22 ½ station house, Sunday October 25th during normal hours noon to 5pm.

An historic photo exhibition of the PPIE Fire Department stations, equipment and staff will be available for public viewing, as well as tours of the historic building that houses the crews and the SF Fireboats, as well as Engine 35.

The building was originally at the PPIE fairgrounds, then after the Expo’s closing, it  was barged to its current pier 22 1/2 location. Although not one of the three fair grounds stations, department historians suggest it was the headquarters of the fireboat Denis T. Sullivan’s chief and crew.

Battalion Chief Jas F. Layden was assigned in charge of 100 fire fighters with the most up to date apparatus stationed around the 650 acres of the Expo. In 1915 the cost of the equipment was $100,000. After the Expo closed, the apparatus were sold to various fire departments around the Bay Area.

During the run of the Expo from February through December, forty-four alarms were responded to and the total losses to fire were no more than $250 (1915).

Admission is free and the general public is encouraged to view the historic photo exhibits, tour the station’s main floor, and com room that contains vintage equipment, department memorabilia and alarm systems. Also the original cast iron spiral staircase to the second floor, was installed to keep the horses from following the fire fighters up to their quarters.

Engine 35 T-shirts and sweat-shirts are available for sale.

Berkeley Architectural Heritage Association
Steven Finacom will talk about the many Berkeley connections to the PPIE and the GGIE--the Treasure Island World's Fair 25 years later. Berkeley people helped shape and build both expositions and flocked to enjoy their glories. He will explore their contributions and experiences as well as the tangible legacies of the fairs that remain in the East Bay
Learn More
view more events