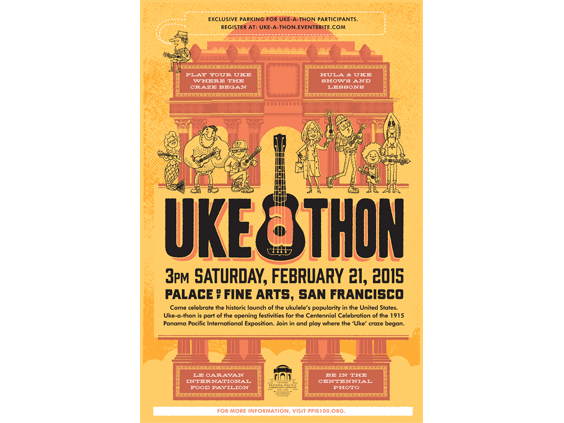 SAN FRANCISCO, Calif.  February 11, 2014 – As part of the opening weekend celebration of the 100th anniversary of the Panama-Pacific International Exposition (PPIE), organizers are “calling all Ukes” to join in the festivities by hosting a massive PPIE100 Uke-A-thon at the historic Palace of Fine Arts, the only remaining structure from the 1915 Worlds Fair.

The PPIE100 Uke-A-thon will begin at 3:00 p.m. on Saturday, February 21, 2015 and take place in and around the beautifully restored Palace Rotunda.  Registration and details are available at www.PPIE100.org.  All participants are asked to register online at: Uke-A-thon.eventbright.com.

“We want to celebrate the historic launch of the ukulele’s popularity in the United States and re-create some of the enthusiasm and fun where the “Uke” craze began one hundred years ago,” said Jan Berckefeldt, Executive Director of the Maybeck Foundation, a PPIE100 organizer which oversaw the restoration of the Palace of Fine Arts with the San Francisco Department of Recreation and Parks (RPD).  “We are literally calling all ‘Ukes’ to the Palace to be part of this amazing celebration.”

The Uke-A-thon is expected to draw hundreds, possibly over a thousand, Ukulele players and enthusiasts, performing together and includes:

“We are all so honored and thrilled to help tell the story of the ukulele, its origin and historic relevance to the 1915 World’s Fair,” said Hiram Kaailau Bell, master Uke instructor and performer.  “The Uke-A-thon will bring together families and players to reignite the Uke craze that started 100 years ago and is so vibrant today among Uke players young and old.”

In 1915 the ukulele was given a national stage on the U.S. mainland during the Panama Pacific International Exposition, which celebrated the completion of the Panama Canal, and showcased San Francisco’s recovery from the 1906 earthquake and fire. With exhibits from countries worldwide, it attracted more than 17 million people.

The territory of Hawaii hosted a Pavilion that succeeded in creating a buzz with its main attraction – Hawaiian dancers and music performed by visiting groups of accomplished Hawaiian musicians playing slide steel guitar, Spanish guitar, mandolin, and of course, the ukulele. Henry Kailimai who headed the delegation of musicians from Hawaii, led the Quintet that introduced his hapa haole song “On the Beach at Waikiki” (AKA. The Golden Hula) to millions of exposition visitors. George “Aoki” Akai was another accomplished Hawaiian composer and steel guitar player who led the Royal Hawaiian Quartet at the exposition pavilion. Jonah Kumulai, a successful Hawaiian businessman, politician and manufacturer of Hawaiian ukuleles received a PPIE gold medal for the quality of his instruments.

The PPIE100 Uke-A-thon is part of an all-day Community Day at the Palace of Fine Arts, which takes place on Saturday, February 21st beginning at 12:00 noon and lasting throughout the evening.  Festivities include a day filled with fun, family events, free performances, entertainment, exhibitions, interactive innovation modules, games, art projects, displays of artifacts from the 1915 World’s Fair, food, and a historic light display of the Palace as it was in 1915, among other exciting activities.

All the details for the weekend events can be found at www.PPIE100.org.  This specially designed website has been created to bring together all the history, stories, special events, activities, partners and exhibitions taking place during the year-long PPIE100 centennial celebration. Follow PPIE100 on Twitter @PPIE100, on Facebook at http://www.facebook.com/PPIE100.