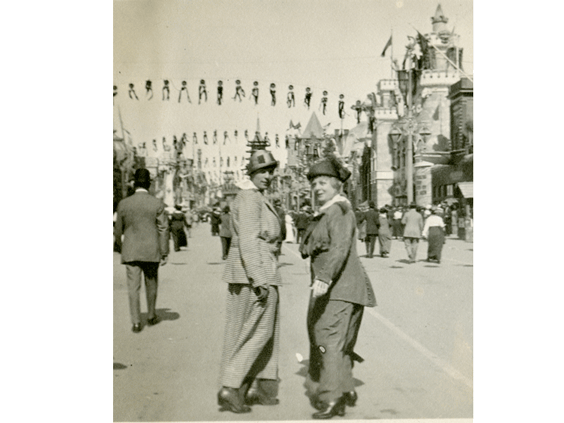 Their participation in the fair—Hearst, twelve-year-old African American student Virginia Stephens, artist model Audrey Munson, fairgoer Alice Sue Fun, and African American journalist Delilah Beasley—and the issues they faced are the subject of a presentation by Erin Garcia, curator of CHS’s exhibition “City Rising: San Francisco and the 1915 World’s Fair,” on December 3, 2015, at the California Historical Society. We offer this preview:

The widow of Senator George Hearst, mother of newspaper magnate William Randolph Hearst, and one of the wealthiest women in America, Phoebe Apperson Hearst (December 3, 1842–April 13, 1919) was the first female regent of the University of the California and founder of the University’s Lowie Museum of Anthropology, later renamed the Phoebe A. Hearst Museum of Anthropology.

Hearst played a crucial role in making the PPIE’s success as honorary president of the fair’s Woman’s Board. The Woman’s Board raised funds, oversaw hospitality for the fair, and ran the fair’s administrative offices, housed in the west wing of the California State Building. Reflecting the reform ethos of the day, the members of the Woman’s Board represented issues such as social relief, the suffrage movement, and the safety of women and girls at the fair.

The cause Hearst was most closely associated with was the effort to preserve the Palace of Fine Arts, begun even before the fair ended. The only building from the fair still standing in its original location, the Palace was located on the west end of the main fairgrounds and displayed thousands of artworks. On October 16, 2015, Palace of Fine Arts Preservation Day, a percentage of the fair’s entry fees was used to preserve the building. Hearst and her son, William Randolph Hearst, substantially underwrote the campaign.

Twelve-year-old Virginia Stephens (1903–1986) won a contest sponsored by the San Francisco Call Newspaper to nickname the fair. Her winning submission, one of 1,300 entries, was The Jewel City—a reference to the skyscraping, jewel-encrusted tower at the center of the fairgrounds.

Few people knew that the Oakland schoolgirl was African American. As reported in The Crisis, published by the National Association for the Advancement of Colored People (NAACP), despite recognition in some local newspapers, “We regret to say that when it was discovered that Miss Stephens had colored blood there was a sudden silence on the part of the press and the only recognition ever given her was a season ticket to the grounds.”

Stephens might have remained anonymous but for the efforts of the black women’s club members who worked to influence prevailing attitudes of racial discrimination and inequality. At the fair’s Alameda County Day on June 10, 1915, they arranged for her to be crowned queen and to ride with fifty other African American children on a parade float described by the Oakland Sunshine as “a credit to the race.” Stephens went on to attend the University of California, Berkeley as an undergraduate and then BOALT law school. She was the first African American woman admitted to the bar in California and had a long career in the State Office of Legislative Counsel in Sacramento.

In the first decades of the twentieth century, Audrey Munson (1891–1992) was the most sought-after artist model in the country—“the most perfectly formed woman in the world.” Her face could be seen at the fair on every one of the 288 days it was open. More than three quarters of the female sculptures and figures on the fairgrounds bore her likeness, earning her the nickname the Exposition Girl.

Munson is probably best remembered at the fair as the Star Maiden. Ninety Star Maidens encircled the Court of the Universe, the exposition’s central plaza.  These plaster figures stood six feet tall, with colored cut glass set into their star-like headdresses.

After the fair, Munson was cast in four films and her career seemed promising. However, she became embroiled in a murderous scandal that ruined her reputation. In a 1921 newspaper column, she asked: “What becomes of an artist model. . . . I am wondering if many of my readers have not stood before a masterpiece of lovely sculpture or a remarkable painting of a young girl . . . and asked themselves the question, ‘Where is she now, this model who was so beautiful?’” Though she lived to the age of 104, Munson spent the last sixty years of her life in a mental institution.

Sixteen-year-old Alice Sue Fun (1899–1989) was one of the nearly 19 million people attending the fair. Her experiences there were captured in oral interviews conducted by professor and author Judy Yung in 1999.

In 1915, Fun worked in the hat department at the I. Magnin department store in San Francisco, where she earned about twenty-five dollars a month. This income afforded her a measure of freedom, including many visits to the fair. “We saved to go see the fair,” she recalled. “For about twenty cents a day you could spend the whole day there. My mother also went many times. You don’t just see it once because there were so many things to see.”

Fun was particularly impressed by the Chinese compound, which featured Chinese art, ceramics, furniture, carvings, ivory, and fine embroidery in displays that presented both the country’s cultural heritage and its progress toward modernity. The fair, “the highlight of my life,” affirmed Fun’s cultural heritage at a time of discrimination and racism toward Chinese people in California.

The career of journalist and historian Delilah Beasley (1871–1934) spanned fifty years. Beasley reported for both the Oakland Tribune and the Oakland Sunshine, the state’s leading black newspaper. Her Tribune column, “Activities among Negros,” was the first column authored by a black woman at a major newspaper in California. Her book The Negro Trail-Blazers of California (1919) became a classic in the field of California black history.

Beasley was a so-called “race women.” She and other black women sought to “lift as they climbed.” Decades before the mid-twentieth-century civil rights movement, these women organized against and tried to change the prevailing racial climate in which black Americans lived.

In 1915, as one of the state’s most influential black reporters, Beasley interpreted for African Americans what the world’s fair could mean for them. For Beasley, the fair flew the American flag and people of her race were welcome there. “The mere fact that colored children marched through the streets of San Francisco, carrying the Stars and Stripes,” she wrote about the African American community’s participation in Alameda County Day, “showed a decided advance and change of feeling toward the colored race in these parts.”

Lynn M. Hudson, “‘This Is Our Fair and Our State,’ African Americans and the Panama-Pacific International Exposition,” California History 87, no. 3 (2010)

Anna Pratt Simpson, Problems Women Solved: Being the Story of the Woman’s Board of the Panama-Pacific International Exposition (San Francisco: The Woman’s Board, 1915)

The participation of these five women in the fair and the issues they faced are the subject of a presentation by Erin Garcia, curator of CHS’s exhibition City Rising: San Francisco and the 1915 World’s Fair, on December 3, 2015, at the California Historical Society.