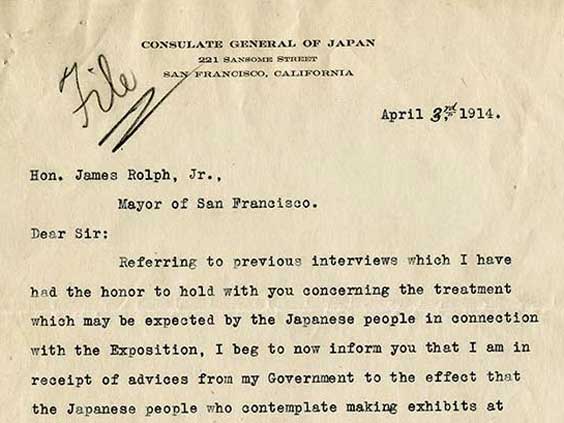 On April 2nd and 3rd, 1915, the Consul General of Japan, Y. Numano, addressed an unequivocal appeal to PPIE president C. C. Moore and San Francisco mayor James Rolph, Jr., expressing his concerns about anti-Japanese discrimination at and during the Panama Pacific International Exhibition in San Francisco. Although the California Alien Land Law of 1913 (aimed at excluding Japanese immigrants from land ownership) was not explicitly mentioned in the letters, it undoubtedly influenced the Consulate’s concerns about the anti-immigrant and anti-Japanese climate in San Francisco and throughout the state. In the letters, Numano demanded, on behalf of the Japanese government, a “written guarantee or assurance” that:

1) All Japanese “shall be accorded just and impartial treatment,” not only on Exposition grounds, but throughout the entire city.

2) No Japanese “shall be subjected to discriminations [sic] of any character whatsoever,” not only on Exposition grounds, but “in all places and on all occasions,” including “hotels, restaurants, barber shops, places of amusement and other public resorts.”

3) No Japanese shall be harassed or discriminated against by organized labor. In his letter to Moore, Numano went further: the Exposition Company “shall guarantee that it will use its best endeavors to prevent the introduction into the California Legislature of any measures of an anti-Japanese nature, and, further, that it will in case such measures are introduced, use all its power and influence to procure the defeat of same.”

PPIE President C. C. Moore responded to Numano’s communication the following day, guaranteeing unconditionally that the Administration of the Exposition would do everything in its power to assure that all Japanese be extended “just and impartial treatment,” promising that “every influence, prestige and authority” would be brought to bear not only in the city of San Francisco, but also at the state legislative level.

These extraordinary letters can be found in the California Historical Society’s collection of James Rolph, Jr. records, which includes several boxes of manuscript materials documenting PPIE and Rolph’s role in the exhibition as mayor of San Francisco and vice president of the Exposition Company Board of Directors.