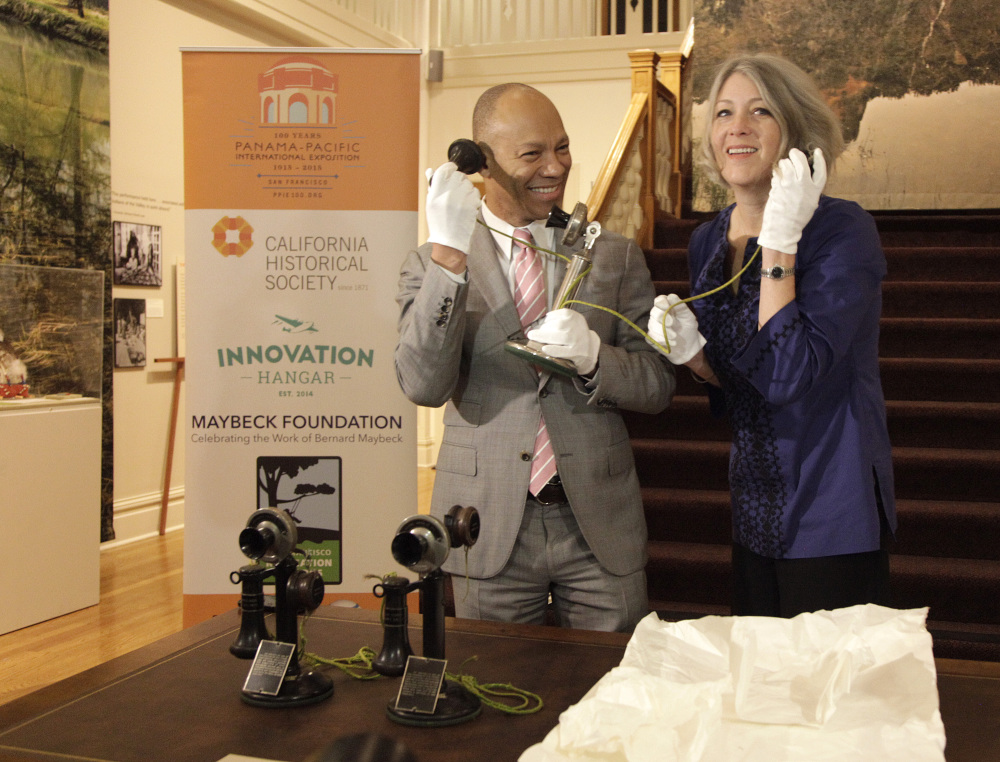 Leading up to the 100th anniversary of the first transcontinental telephone call and the Panama-Pacific International Exposition Centennial Celebration (PPIE 100), AT&T and the California Historical Society unveiled the original telephones that were used to make the first-ever transcontinental phone call on January 25, 1915. The great American milestone, demonstrated in advance of the 1915 World’s Fair, spurred a century of innovation in the telecommunications industry and helped showcase San Francisco’s “rebirth” following the Great Earthquake and Fire of 1906.

“The first transcontinental phone call was not only a breakthrough for AT&T, it was a key milestone in our nation’s rich history of innovation,” said Ken McNeely, President of AT&T California. “A hundred years ago, the world marveled as AT&T was able to send the human voice over 3,400 miles of wire from one coast to the other. Today, we can hold the whole of human knowledge in the palm of our hand.”

“America’s latest innovations were on full display at the World’s Fair in 1915, and the first transcontinental phone call was one of the most significant technologies shown,” said Dr. Anthea Hartig, Executive Director of the California Historical Society. “These exhibitions will celebrate PPIE, giving residents and visitors the opportunity to see these original phones and other artifcats from the World’s Fair that highlight the great innovation milestones and discover how our spirit of innovation has shaped the city’s past, present and future.”

PPIE and the 1915 World’s Fair were held to celebrate the completion of the Panama Canal, and to show that San Francisco had recovered from the 1906 earthquake and fire. In commemoration of this seminal event in San Francisco history, the California Historical Society (CHS), together with the San Francisco Recreation and Parks Department, Innovation Hangar and Maybeck Foundation are coming together to host PPIE100 – a yearlong series of public events, exhibitions and activities presented by more than 35 Bay Area cultural, civic and business organizations to reflect on PPIE’s historical significance and celebrate the innovations of “Then, Now and Tomorrow”. AT&T is the presenting sponsor of PPIE 100.

The original phones unveiled today will be on display at the California Historical Society as part of its PPIE100 “City Rising: San Francisco and the 1915 World Fair” exhibition at 678 Mission Street which officially opens on February 22nd in San Francisco. City Rising, will also feature a sister exhibition at the Palace of Fine Arts which opens February 21st as part of a citywide celebration and community day at the Palace that marks the 100th anniversary of the 1915 World’s Fair. Dates, hours and more information about City Rising and PPIE100 is available at www.ppie100.org.